Whose code prevails...peeling the onion! 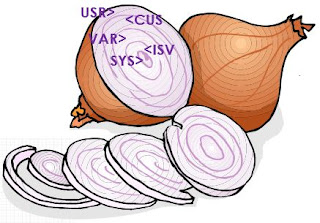 When applying partner models, be sure to check for code merge errors.  Also confirm that your partner code is going in the same layer.

As you can see in the diagram, SYS (Microsoft code) is the core.  Then ISV, VAR, CUS, and lastly USR.  What this means if the same code object exists in two or more layers, the code in the outermost is what will be used.

In our company's upgrade, we were surprised by one application that moved from the VAR to the ISV layer.  The standard process for installing models assumes that the layer has not changed.