Reasons to upgrade the infrastructure...below are the comments from my company's DBA:


With windows server 2012 we get on a more updated platform, big improvements to remote desktop services, PowerShell management, and a host of other management features.

Keeping our platforms moving forward will continue to offer up improvements and new features offered up by Microsoft.

This is just to name a few reasons.  Keeping up with your vendors on software and hardware versions always has its advantages.  New features and enhancements are typically added to the most current releases.  You sometimes have to push to get support and bug fixes to prior releases.

Below is a diagram from Microsoft's TechNet Library Scenario: Perform in-place upgrade to AX 2012 R2 or AX 2012 R3 [AX 2012].  This for the most part describes our current environment and our target environment, what's different is we have a few additional AOSs and the BI are not represented.  On our BI server is where we have SSRS, SSAS, SSIS, Management Reporter and SharePoint (for Enterprise Portal). 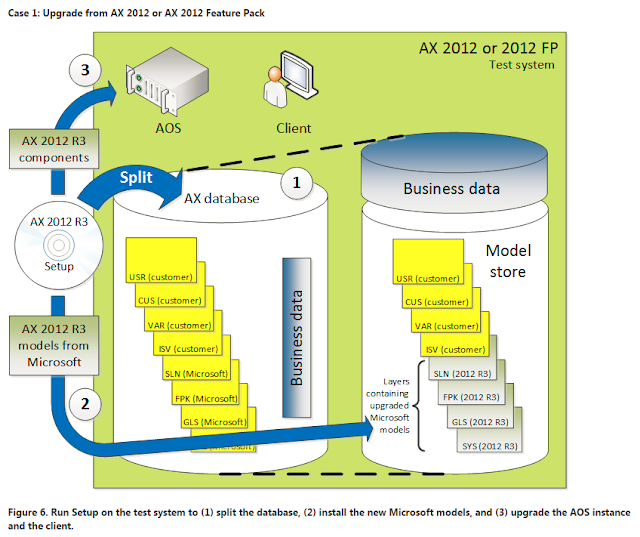 We started our journey many moons ago as a background project.  Background projects don't get much steam as everything else takes priority.  So if you make the project official with a stated priority for your resources, the better off you will be!

When we started, the latest version out there was CU9.  Here are the basic steps (I'm sure I'm leaving out many detailed tasks done by our system administrator, but this should give you the general idea):

Then there are steps that splits the database into two as depicted in the diagram above.  Surprisingly, we found out that the Business Data that is depicited in the above diagram contain everything from our R1 database however the AOT is not referenced anymore!  The R3 modelstore that we built is now in the modelstore database.

We also had to publish all SSRS and MR reports.  BI cubes were built and deployed.  Client was set up.

Friday (January 6, 2017), the project team met and we provided the URL to our project team!  They now have access to R3 with Planar data.